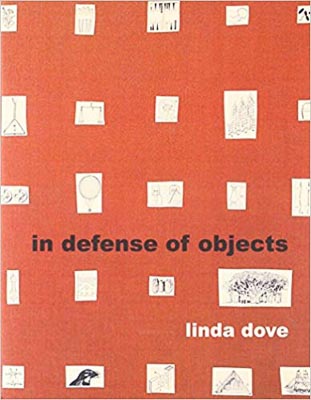 Buy it from Bear Star Press or Amazon

Bear Star Press Press Release, Cohasset, CA - As the title of Linda Dove’s debut poetry collection suggests, the book takes as its primary focus things and our relationship to them. From “Outspeak,” the book’s opening poem: “You sit dumb on the shelf. Maybe you are an urn, a jewel box, a shell. An artist’s / scrawl.” But Dove’s project is a two-way interrogation. She “calls out” the objects, attending closely to what they seem to want to say, even when they are shapeshifters, as in “Nomenverbum” where the object, in this case a word, is speaking sometimes as noun, at others as verb. “This part of speech bolts from solitude, shakes itself / into another form . . .” and we must “peel back the bell” too “know the spiel.” Dove’s wordplay—note how she riffs on “bell” here—imbues her investigation with a great deal of joy and irony.

Elsewhere, alluding to the artwork on her book’s cover, Dove writes that objects "are more than the sum of their parts / . . . They may also be holes / left in the husk of a book, like dark matter. Which, though unfelt, / is not neutral.” Or, as in “Morandi at the Met,” the things may be so humble that only the artist will feel their mysterious pull. “The objects touch, or don’t. The thick brown stripe, like a flag / that one day turns white, huddles next to the soul-patch gleam of two cups. // He doesn’t know what they’ll do next. Inched toward the edge of the table, / they look forward and back.”

I confess to feeling weary of the gimmicks and intentional obliquity of many of the manuscripts that cross my desk. When I encounter a collection this nuanced and careful, and this alive to the concrete world in which I live, it makes me glad to be a publisher:

Peel back the bell,
its iron curve, its sounding skin.
Its peal twists in air.
Ding dong the witch is dead.
No doubt, you know the spiel.
—from “Nomenverbum"

The meditative, quiet beauty of Linda Dove’s In Defense of Objects helps defend the reader against all sorts of daily blindnesses. Although there are lovely poems here about art, Dove leads us to see the ordinary material world, too, as shaped and heightened. “Until memory is allocated, objects do not exist,” says a computer science document quoted here, and many of Dove’s poems will now be allocated to my memory. Not least of the objects worth defending, this poet shows, are words themselves, which she employs with subtlety, wit, and depth of feeling. —Mary Jo Salter, author of A Phone Call to the Future: New and Selected Poems

From reliquary to relic, from the idol that cannot hold our gaze to the Appaloosa's eye that looks back, the subjects of these roving and well-crafted poems in Linda Dove's debut collection draw our gaze to the immediate and imperative duty of attention. Indeed, to read In Defense of Objects is to experience first hand both the prehensile skill of the sculptor and the philosopher's skepticism and rigor. In Defense of Objects is a remarkable book of praise. —Miles Waggener, author of Phoenix Suites

As far as Linda Dove goes toward a defense of the material world, she never fails to return us by her own means to the inexorable nature of things. In Defense of Objects becomes at times conscious of forms only to show a dissatisfaction with the limits of form, exploring details without overwhelming us, always making us hungry for her new lexicon of things. If we can take a lesson from the Appaloosa’s eye, we’ll find ourselves watched as we are watching, captured in the very act of poetic engagement. It is our world Dove rebuilds, for here we find the texture of things we have neglected, forgotten, or simply never taken the time to see. —George Moore, author of Headhunting